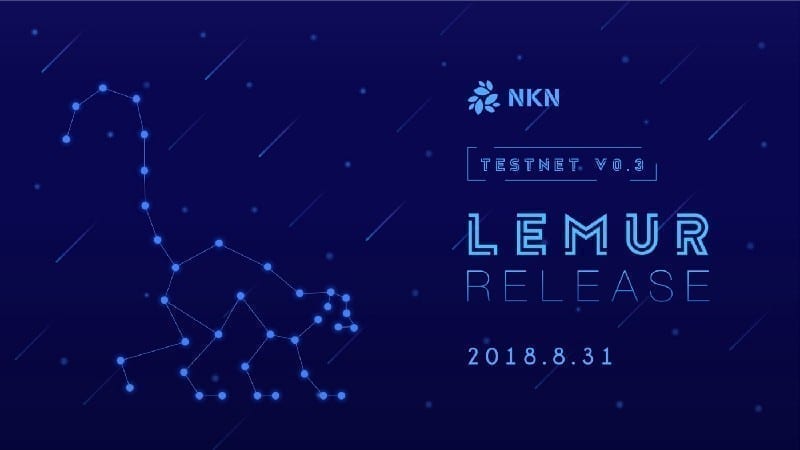 Today we are extremely excited to announce the on-schedule release of Testnet V0.3 Lemur, another key milestone in technical development by the NKN team. In this version, both functionality and performance of NKN’s system have been substantially strengthened .

The release of the Lemur demonstrates that NKN team have accomplished a key milestone as planned, as well as entering into the next development phase towards testnet v0.5 Koala. This release builds a solid foundation and bodes well for on-time launch of our mainnet during first half of 2019.

With this Lemur release, we opened up the door for community members to run their own full nodes, join the NKN testnet, and start experimental mining. Decentralization is both in the spirit and practice of NKN project. We will publish the experimental mining guidance in the next few days as well.

In addition, we will publish our official performance testing results during the next weeks and months. This is commonly used for many blockchain projects and will help put a “NKN dot” on the scalability map, and showcase NKN’s contribution to advance the blockchain technology in general.

Pleases follow up on our official channels to receive the latest updates!

a. Adding timeout reselection function when block producer is offline

f. Support to receive and count the number of votes of different blocks of the same height

g.Node synchronization state and the processing flow for different states of the node increase

a. Signature chain structure is upgraded

b. Relay node can set whether to participate in mining or not

5. Updates in the DDTN design include:

6. The basic functionality for MOCA consensus is now complete and we have also added the validation of block producers in the Lemur version as well. This release also includes:

a. Block synchronization based on neighbor voting,

The table below provides a comparison of the new features and performance enhancements between V0.1 Firefox and V0.3 Lemur releases: