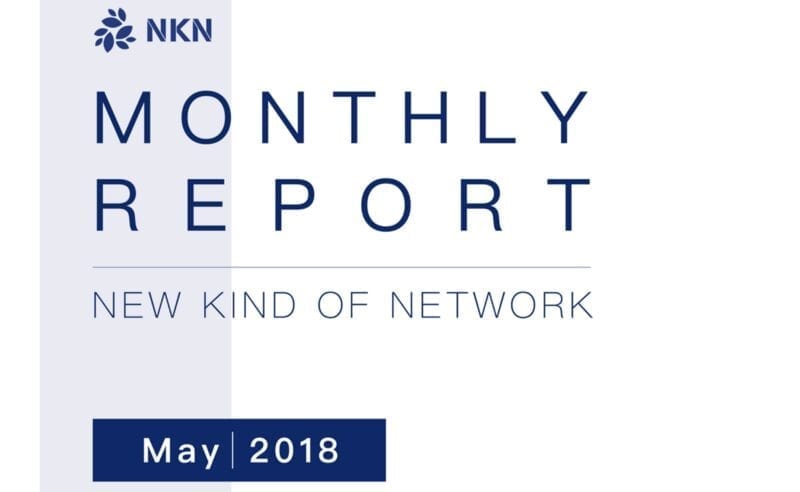 NKN team had a great month of hard work to deliver results. Before we dive deep into the progress made in April 2018, we need to clarify the actual status of NKN github repository.

To those who may have concern on the code history from ft-blockchain,

● The ft-blockchain code in NKN repo is an incentivized online discussion forum for DEMO only. It is based on DNA and is NOT core purpose of NKN project.

● DNA complies with APACHE license that by design permits anyone to reuse the code and create derivative products almost under any license, ranging from copyleft to proprietary.

● The founder of NKN, Yanbo Li, is the key maintainer for DNA . He is also the 1st and major code contributors for DNA. https://github.com/DNAProject/DNA/graphs/contributors

● The core code of NKN (nknorg/nkn repo) is still under development and will open to public soon. NKN team want to guarantee the framework and main direction of nkn-core development. The nknorg/nkn repo comprises four core parts as a public blockchain infrastructure. They are decentralized data transmission network (DDTN), proof of relay (PoR), blockchain consensus and incentive distribution mechanism. With all these elements, NKN is served as a network-oriented blockchain platform.

Although nknorg/nkn repository is private one, from the statistics below, you will find, NKN team is proactively working on it days and nights.

We are working to publish NKN core repo source code. The NKN open source day is an important milestone for this project. It will come soon and stay tuned.

To better understanding NKN R&D activities, we can divide the tasks into two categories as backend blockchain and frontend App UI development sections.

● NKN (Minimum Viable Prototype) MVP tested with 10 nodes, it successfully created blocks; there is no problem found when nodes join the network and exit the network.

● DDTN development is ongoing. In a simplified version, it is now possible to forward packets in the distributed hash table. DDTN can communicate via websocket and traffic is successfully forwarded through NKN nodes.

● Proof of Relay (PoR) development is ongoing. A small and fixed portion of the packets will be randomly selected as proof. The random selection can be verified and cannot be predicted or controlled. Proof will be sent to other nodes for payment and rewards.

● Majority Vote Cellular Automata (MVCA) based Ising consensus development is ongoing. Consensus among massive nodes can be reached efficiently by only communicating with neighbors using a novel algorithm. Consensus is reached for every block to prevent fork.

● The prevention scheme for collusion attacks was designed, which prevents malicious nodes who share their knowledge to cheat for rewards.

● Moore type Cellular Automata based Ising Consensus simulation successfully performed and verified the set up for with a predefined fault tolerance.

● Frontend team agreed that a web client has good cross-platform features and can use the existing R&D strength to rapidly advance App UI prototype design.

● App UI information architecture was fixed. Guest and miners will be differentiated from front end perspective.

● App UI prototype drafting was complete and under internal review. It started from a Chinese version as below, and will be translated English version once it is finally fixed.

● Finish the preliminary design of Proof of Relay (PoR) as a useful Proof of Work (PoW) mechanism for distributed data transmission network;

● Finish the preliminary design of consensus mechanism based on Cellular Automata (CA);

Our business development team has been discussing with one of the leading cable TV and Internet service providers in US, regarding their wireless and IoT plans and how NKN technology can help them. We explored a few use cases for smart cities, where IoT devices such as smart meters will be wireless connected via a mesh network. NKN technology can enable the decentralized network relay functionality, provide security and verifiability for the small volume yet highly profitable data traffic, as well as supply a micropayment mechanism.

Looking further ahead, the cable companies in the US would like to build out their own wireless network (licensed, unlicensed, and shared licensed) in order to compete effectively with the existing cellular operators. The traditional business model might pose a steep uphill battle. However, NKN is working with the leading operators to build alternative or hybrid business model with tokenization that can differentiate.

Fundamentally, the ecosystem NKN envision calls for many more smaller network providers so the users have more choices, better price and better services. NKN is actively seeking partnership with WiFi access providers, real estate owners, and small businesses to bootstrap their network business. Once our token is listed, NKN Foundation will play a key role in this space.

In May, the business development team will be sponsoring and participating in the upcoming WiFi NOW conference in the San Francisco Bay Area. Over the course of the event, NKN will be meeting with WiFi equipment vendors, service providers, and more to explore opportunities to advance the NKN ecosystem. Our own, Bruce Z. Li will be participating in a panel discussion regarding the future of WiFi, further sharing NKN’s technology leadership in ushering in the new generation of decentralized networking.

It is great that we see diversity of NKN community. According to the data analytics, the major NKN follower comes from more than 38 countries and 18% comes from United states while 14% comes from Russia. We are looking forward to see more and more fans all over the world to enjoy NKN project and make friends with each other in our community. We are also welcoming community helpers to create an intimate, relax, technical environment with us together.

The next step, NKN team will enhance community building by a series activities. We hope our community can help improve community by introducing more members into

NKN Core team members Yanbo Li, Bruce Li, Justin Wang and Yilun joined the AMA session in Telegram on April 18. The topics are covering about the cooperation model with Turing Award winner Dr. Diffie Whitfield and cryptic lab, NKN business model and competitors and project progress and long-term roadmap. Top 3 Q & A are under voting on Twitter and the winners will be granted the access our NKN club directly.

Top 3 Questions were voted by more than 300+ participants on Twitter.

In order to thank all community helpers who gave continuous great support to NKN and create an intimate community environment between NKN and our fans, we are planning to release the NKN club plan in the early of May. At the same time, club logo and corresponding accessory T-shirt vote on Twitter for the best one will release accordingly.

Excerpt the NKN club plan in the early of May, we will announce NKN Chinese name collection in parallel as well. We are happy to work with 10000+ members in Telegram CN Group to collect their feedback and will select Top 5 names and vote on Twitter.

NKN official channel on Reddit and Medium Open to Public

According to the suggestions of the community members, we have opened the NKN Reddit channel on April 28: https://www.reddit.com/r/nknblockchain/ Community gave highly appreciation on the almost similar idea between Pied Piper’s new internet mentioned in” Silicon Valley “, the US TV drama and NKN’s decentralized network. The difference is that NKN is moving on to deliver the real-world product.

That is all for NKN project progress in April 2018. See you next month, stay tuned.