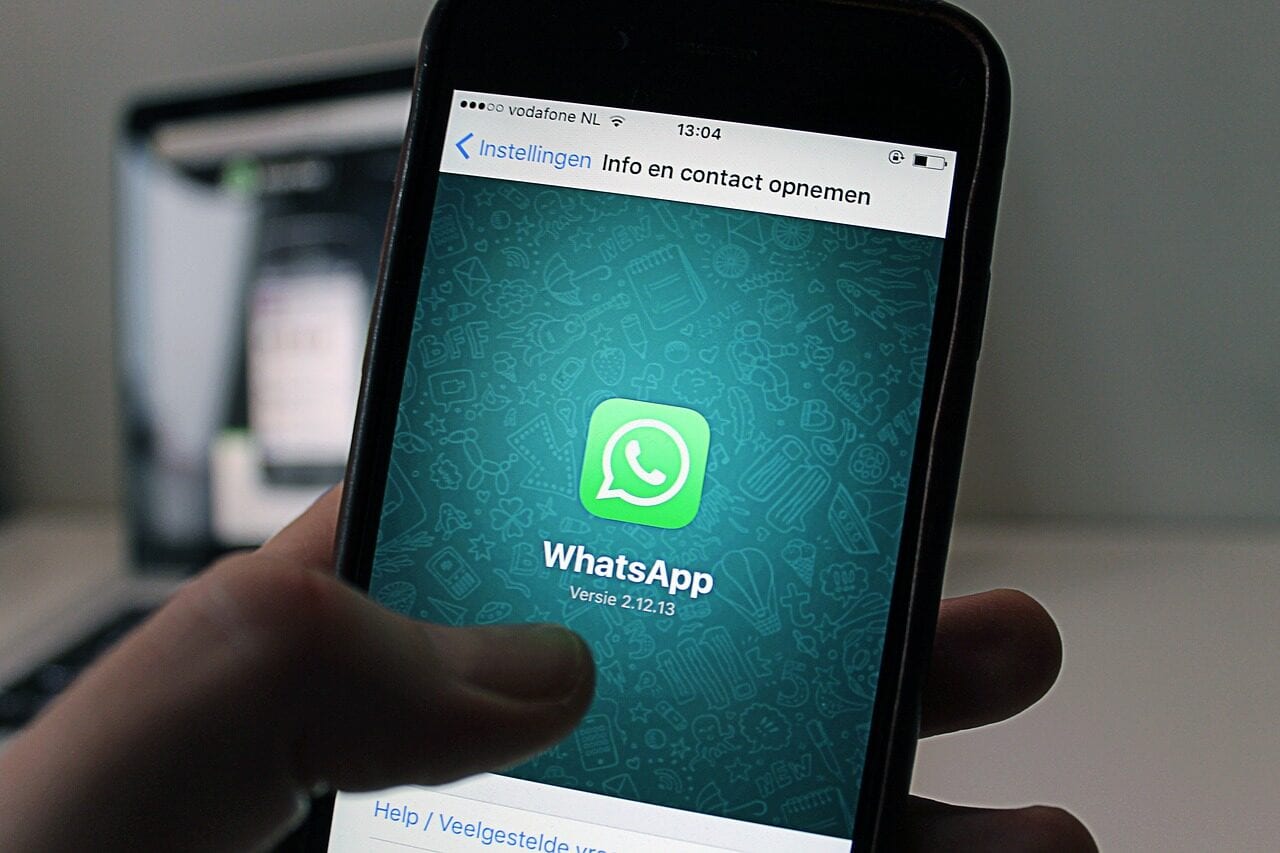 WhatsApp is a social media messaging app, now owned by Facebook, that is popular around the world. Over a billion users rely on WhatsApp to call, chat or video with their contacts over the internet.

Thanks to this popularity, WhatsApp is often a prime target for spam, scams and other security concerns. To mitigate some of those security risks, WhatsApp touts end-to-end encryption for all of the 65 billion messages sent across its platform every day.

But is that enough? Here, we discuss whether or not WhatsApp is really a safe way to share information. Then, we’ll show you what you can do to enjoy the most secure experience with WhatsApp.

WhatsApp is a social messaging app used by more than a billion people. It’s a convenient way to communicate internationally with chat, call and video features that allow you to stay in touch with anyone from your contacts list who also has the app installed. You can communicate with individuals or groups, easily sending photos, documents, videos or recording voice messages with the platform.

While the app is extremely popular on Android and iPhone devices, you can access a web version via computer, too. It harnesses the power of the internet, using a simple data connection to provide seamless connectivity. It is a popular alternative to expensive international calls, allowing you to contact anyone on the planet for free.

Why Do People Use WhatsApp?

WhatsApp is a very convenient way to stay in touch with people around the world. The intuitive app allows you to send texts or phone calls as long as you have a data connection.

It is also an efficient means of communication. Chat with a single contact or an entire group. No matter where you are in the world, your messages are sent and received instantly, and for free. No international call or texting rates apply to WhatsApp messages.

Finally, it has end-to-end encryption, meaning that messages you send are sent securely. This is meant to ensure privacy for WhatsApp users.

WhatsApp Security Threats to Know About

Despite the sophisticated encryption technology that WhatsApp employs, there are a number of pitfalls that may expose you to security issues. While the transmission of messages over WhatsApp is secure, there are issues to be aware of once the messages are sent or received. The desktop version of WhatsApp, for example, accessed with a web browser is often copied by imitators and potentially laced with malware. There are also concerns about backing up unencrypted messages that you’ve received, as well as potential issues with WhatsApp sharing data with its parent company, Facebook.

WhatsApp has also been a vector for fake news, inciting terrorism in India and political disruption in Brazil. Though the company has taken steps to curb the spread of spam and misinformation, there is still a risk that it may happen again.

When a user downloads WhatsApp on a mobile device, they do so either from Google Play or the app store on iOS. Thanks to the app’s popularity, there is minimal confusion as to which app you should download. When accessing the in-browser or desktop apps from a computer, it’s a bit more difficult to discern the true WhatsApp site.

To seamlessly connect your mobile account and use your computer to send or receive messages, you need to authenticate the connection by scanning a QR code displayed on the computer. Since the correct site is a little less obvious than it is in either of the app stores, scammers and hackers frequently try to mimic the site.

Some use false sites to phish for personal information and then bombard the user with spam once they supply it. Others embed malware or spyware in the software downloads that are unwittingly mistaken for authentic WhatsApp sites.

End-to-end encryption is one of WhatsApp’s main attractions. Sending messages to another user is safe, meaning the message will not be intercepted during transmission. What happens after the message is sent or received to your device, however, is a different matter. Upon receipt, the message is decrypted for the recipient and available on your device.

Periodically, WhatsApp will backup your data so that in case anything happens, you can restore any messages or media sent or received since your last backup. This process uses a data connection to save a copy of your messages. On Android devices, this data goes to Google Drive, and for iPhone users, the backup is stored on iCloud.

Information backed up to either location is not encrypted, so once you back them up, they are no longer truly safe. Hackers can potentially steal your information, and if the data pertains to a criminal case, it can be accessed by obtaining a warrant.

WhatsApp was purchased by social media giant, Facebook, in 2014. Facebook has had an effective market monopoly, so the acquisition raised antitrust issues. To approve the purchase of WhatsApp, the EU required Facebook to assure its users that their data from each platform would be kept separate.

In 2016, however, Facebook walked back on that agreement in its revised Privacy Policy and indicated that WhatsApp user data can be shared with Facebook. Though the full extent of the data shared to Facebook and possibly included in their inaccessible user profile isn’t clear, WhatsApp does at least share your phone number and usage data.

While WhatsApp users were initially allowed to opt-out of sharing that information with Facebook, that option has been stealthily removed. This link to Facebook and the potential consolidation of all of Facebook’s apps could put your messages and user information at risk in the future.

False Information in the Media

WhatsApp has effectively removed many of the barriers of communication. Consequently, news—real or unfounded—spreads quickly with a few simple taps on a screen.

WhatsApp has been implicated in several hoaxes and some widespread violence that occurred in India. In 2017 and 2018, WhatsApp users quickly circulated misinformation that resulted in the lynching of several people falsely accused of child abduction. Similarly, business people in Brazil bought lists of WhatsApp phone contacts to manipulate the elections.

While the potential for receiving unwanted and incorrect information remains, WhatsApp reduced the number contacts that you can send or forwarded messages to. Now, messages can only be forwarded to five groups as opposed to 250 in the past, and the convenient forwarding shortcut button was removed from the app in some regions.

How to be Safe on WhatsApp

There are some simple, practical steps that you can take to protect yourself and the information that you choose to send via WhatsApp. Simply being mindful of how your data is being used will help you to decide what steps are necessary to defend your data from hackers or other outside sources.

WhatsApp’s promise of end-to-end encryption lures its users into a false sense of security. Yes, your messages are safe from being intercepted during transmission. Once decrypted to a device, however, WhatsApp data is usually fair game.

WhatsApp automatically backs up your messages and media to the cloud to restore your data if lost unless you opt out. If you’re concerned about hackers accessing your backups or the potential for law enforcement to obtain that data with a warrant, turn off the automatic backup feature. Simply head to settings and select that you ”never” want WhatsApp to backup your data.

If you elect to use the web version or WhatsApp desktop app, make sure that you do so by going to the official, secure site. Going to a site designed to mimic the original may lead you to unwittingly download malware or spyware that can compromise the security of your WhatsApp messages and computer system.

Other sites are designed by hackers to collect your personal information, resulting in future spam. Avoid these security risks by going only to the official WhatsApp web portal or, better still by downloading the WhatsApp desktop client.

Be aware of what you share on WhatsApp and to whom you share it. Under your settings, double check your privacy settings to verify who can see your profile picture, about, status update or live location.

Since the app itself cannot be locked, enable two-step verification in the menu settings which will periodically ask for you to verify your device. Additionally, strong lock screen security will protect your information as well.

Finally, be cognizant of some of the scams out there so that you don’t fall victim to them. There is no premium version of WhatsApp—it has always been free– and your account won’t ever expire. Anything that contradicts those facts is designed to steal your information.

There are several popular alternatives to WhatsApp. Many offer similar platforms with a different regional flair or added features. Some of the best alternatives include:

WhatsApp does provide safe message transmission. As long as you verify that the app or website that you use to access WhatsApp is legitimate, that much is secure.

After your messages are sent, however, it is clear that your data is exposed and vulnerable, especially when backed up to the cloud. If privacy is a concern, consider adjusting your privacy settings and disabling the backup feature. If you need additional security, consider another messaging source with additional protections to secure your chats. Regardless of which platform you choose to use, avoid compromising your personal information and be aware of some of the common scams and potential for fake news to thoughtfully curate your WhatsApp experience.