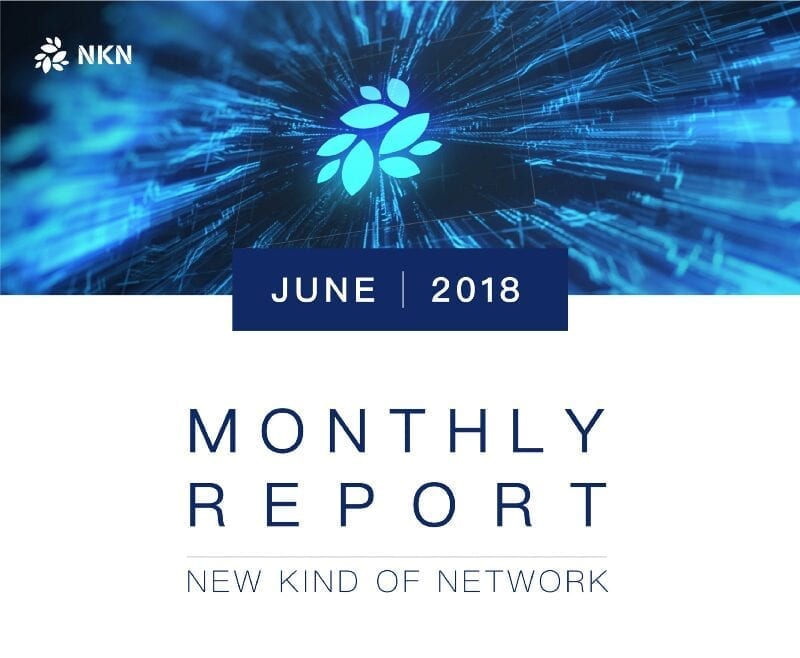 June 2018 was both busy and fruitful for NKN, and our progress has been made in both R&D and community development. For more details, please refer to the following.

NKN launched on Gate.io (https://gate.io/), a world-famous digital asset trading platform, on May 28, 2018, and opened NKN/USDT and NKN/ETH trading pairs. Order trading was started simultaneously. This launch represents NKN as the world’s first public-chain infrastructure to blockchainize network transmission resources, and has taken important steps in establishing a new type of network infrastructure and ecosystem that is open, decentralized, shared and owned by the community.

The NKN team has always been focusing on product development, releasing the most complete features in the shortest possible time. The NKN core code repository was open-sourced (https://github.com/nknorg/nkn) 3 weeks ahead of schedule greatly exceeding expectations.

The significance of NKN’s open source is to gain community consensus. This is the essential characteristic of NKN as a public blockchain. Just like the Bitcoin ecosystem, the value of NKN lies in its users and ecosystems. Open source is also a manifestation of NKN’s confidence in its technology and community building. Only open and transparent technologies can be publicly recognized by the community. Only projects in which the community recognize value, can grow and thrive.

This is the latest NKN development roadmap (updated at https://nkn.org/), which can be divided into two phases: testnet and mainnet. We will be able to provide a full-featured testnet before January 2019. An early version of the NKN mainnet will be released in March 2019 and will be officially launched in June next year, which is three months ahead of the previous plan.

The new roadmap started in May 2018. The main task of this phase was to develop the Testnet preview of Decentralized Data Transmission Network (DDTN), Proof of Relay (PoR), and Cellular Automata Consensus subsystems, including:

Now NKN is in the development phase of the testnet, and released the v0.1 version testnet, “Firefox” on June 16, 2018. This is the first testnet that contains all of the core subsystems, enabling the globally deployed nodes to work and test in real time. The main tasks at this stage are:

The next stage is the release of the v0.3 version of the testnet in August 2018, “Lemur”: Optimizing system scalability and efficiency, the alpha version of the SDK. The main tasks at this stage are:

In October 2018, NKN will release the v0.5 testnet, “Koala”: enhanced anti-attack capability, a larger scope of testnet, and SDK Beta version. The main tasks at this stage are:

In January 2019, NKN will release version 0.7 testnet, “Meerkat”: full-featured test network, complete implementation and performance, and SDK version 1.0. The main task of this phase is to introduce a fully functional NKN testnet, including fault tolerance, data transmission and routing, relay path verification, and a complete implementation of the consensus algorithm. This consensus algorithm will enable fast convergence in large-scale networks.

In March 2019, NKN announced the release of the v0.9 of the mainnet at the end of the testnet phase, “Beluga”. The main tasks of this phase include:

Finally, in June 2019, NKN will officially release the v1.0 of the mainnet, “Narwhal”, which mainly includes:

Bruce Li demonstrated NKN testnet preview at the NEO London meetup (v0.1 Firefox is the first version of the evolving testnet), including 15 nodes deployed in 15 regions worldwide. He introduced the details of the NKN testnet preview.

As you can see in the Internet Topology section, NKN testnet includes 15 nodes running globally. You can see the location and IP address of each node by hovering on the blue dots in the map. The orange line shows the trajectory of packet when it’s being relayed in our network. Orange dots are connected clients. Usually a packet originates from a client, relayed by a few nodes, and finally delivered to another client.

Each node and client in NKN network has a NKN address, which is represented by a point in the virtual ring in the DHT Mapping Topology section. NKN is an overlay network, so all the topology and routing is done in the virtual space. The orange line shows the path of the signature chain above in the virtual space. For a detailed preview of the testnet , you can refer to this video:

Dr. Diffie and the Cryptic Labs team discussed the progress of the NKN project with the NKN team and provided cryptographic technical guidance based on the Cellular Automaton concept and the Ising model consensus algorithm. We were very much in agreement with Diffie’s suggestions for improving the efficiency of verifiable random functions (VRF) and optimizing the connection with clients and servers. We believe that with the joint efforts of experts in cryptography, distributed information processing systems, and the commercialization of telecommunications and technology, NKN will radically change the traditional network and rebuild the Internet we have always wanted. We are honored to have three members of Cryptic Labs join us to review the status of our project: Humphrey Polanen (one of the heads of Stanford Blockchain Security Accelerator), Herman Collins (Director of Human Capital), and Hilarie Orman (Bachelor of Mathematics, MIT/Former Chairman of the IEEE Computer Society Technical Committee)

As part of our business strategy, NKN has been actively engaged with Internet Service Providers in the US, EU, and Asia as well as with infrastructure and device vendors to identify and develop useful Proof of Concepts (PoC) using NKN’s technology. As such, we have identified a number of use cases in areas such as IoT, SDN, Medical, and more that have resonated with operators and vendors and could offer growth opportunities for NKN. In addition, while NKN’s open source software has only been available to the public for a short time, we have seen significant interest from application developers in using our platform.

In the transformation of traditional network infrastructure, NKN pays attention to the advantages of its own blockchain technology and cooperation with traditional telecommunications and the Internet. Recently, NKN has joined TIP (Telecom Infra Project), a telecommunications alliance founded by Facebook, Deutsche Telekom, Intel, Telefonica, Nokia, Vodafone and British Telecom. NKN will play an important role in working groups such as Edge Computing Group, OpenCellular Group and TIP Community Labs. NKN’s innovative economic incentive model combined with blockchain in the field of network transmission will promote faster and broader acceptance of technological innovation by members of the TIP Alliance.

In addition, NKN is also a member of the Open Networking Foundation (ONF). ONF is a non-profit organization composed of telecommunications giants such as AT&T, Google, Comcast, Deutsche Telekom, NTT, and Turkish Telecom, aiming to introduce open source innovation technologies into formal commercial deployments. One of the organization’s most important tasks is the research and exploration of new business models and application scenarios of SDN (Software Defined Network), which coincides with NKN’s innovative model of combining SDN and blockchain. NKN will focus on participating in ONF’s projects: SDN, ONOS, CORD, P4/Stratum, and other major related projects.

DoraHacks and NKN worked together to combine hacking and blockchain technology to solve a series of problems such as the allocation of Internet resources. In the future, the two sides will create a better Internet environment and infrastructure for hackers to create a better tomorrow for the Internet. On June 26th, NKN’s CTO Dr. Yilun Zhang participated in the DoraHacks roundtable discussion and participated in the hackathon evaluation.

The 1st and 3rd place winners of the hackathon, held in the San Francisco Bay area, both used NKN’s JavaScript client SDK which was released only for a week! What surprised the audience was that India’s 9-year-old programming talented girl, Shiry Sree Ju, and her father tied for first place with a gun control and personal information monitoring system Gunsafety developed based on the NKN SDK; in addition, decentralized multiplayer online game Super Sync GO GO GO won the third place, which was developed based on the NKN SDK as well.

The cooperation between NKN and DoraHacks reflects the desire of both parties to use blockchain technology to create a better future for the Internet. DoraHacks will work with NKN to bring together industry experts in developing new advanced technologies in order to solve the internet’s most complex problems.

NKN CEO Yanbo Li presented the NKN testnet preview and interacted with the audience at the Blockchain 2018 conference.

At the Blockchain Connect 2018 conference, Bruce gave a keynote speech addressing “From Turbo Code to Blockchain: Telecom Innovation” and shared the concept of the new Internet and NKN’s new roadmap.

NKN founders Yanbo Li, Yilun Zhang, and Bruce Li were invited to attend the meetup by ABC blockchain Community, initiated by developers from Google. They had a very technical discussion about how to use blockchain to solve challenges in the Internet and networks, and how to bring off-chain real time data transmission capacity to decentralized applications and devices. The talk covers true peer to peer routing using Chord DHT, proof of relay using signature chain, and extremely scalable consensus algorithm based on Cellular Automata.